What’s in a name: Waterboy

Ever wonder about random things? I do. If you know me then you know this is not a surprise, as I will whip out my phone on lunch and look up esoteric facts about, say, polar bears. It’s what makes me very good at my volunteer gig as a reference librarian. I like to know things.

So the other day I was driving in mid-town and passed Waterboy. Now, if you’ve had to endure a lunch with me spouting random facts about polar bears, then undoubtedly you’ve listened to me rave about Waterboy. It’s husband J and I’s favorite restaurant and our go-to for special occasions. We’ve spent every New Year’s Eve since we moved back to Sacramento at Waterboy. But this isn’t about that.

I passed by and thought, “Hmm…I wonder how they got their name?” 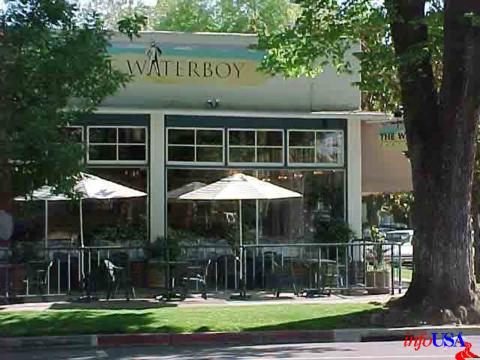 (note: this is an older pic – they have a new fancy sign that caught my eye)

And so I went home, and on my vacation, with my husband and son out of the house and FREEDOM, I spent my time searching on the web for the origin of the name Waterboy.  I came up empty. So I did what any good searching reference librarian would do: I simply emailed the restaurant. Because, by God!, I was going to find the answer if it took the rest of my damn vacation!

People, if you’ve ever wondered such things, preferably while enjoying steak tartare and the best damn Vesper you’re ever going to find, I have the answer, straight from the horse’s mouth. In this case the horse would be Rick Mahan, the owner (owner and answer-er of the e-mail). And no, Mark and Rob, it is not named after the Adam Sandler movie.

Waterboy was, much to my delight, named after the band The Waterboys. I had a copy of “Fisherman’s Blues” (copied from vinyl no less) on cassette tape, with The Pogues “If I should fall from grace with God” on the other side.

I went online to listen to a bit and instantly I was transported back some 20+ years to freezing cold nights in Spokane, in a dorm room on the edge of campus, listening to music WAY too loudly, attempting to study British literature and just being…happy.

My senior year I lived on the other edge of campus, in a much warmer room, with the best late-afternoon sunshine and a wonderful girl named Emily. We used to laugh that “her” song “Emily” was a nice sweet song by a Christian singer, and mine, well, mine was “When will we be married” by The Waterboys. While they never sounded as out-and-out drunk as The Pogues did in recordings, just listen and tell me this isn’t “my” song. This is a song to be enjoyed at night, a scotch in one hand, a cigarette in the other, preferably stone-cold drunk (and if you’ve been reading Joyce so much the better).

For good measure, here’s another. Listen and enjoy Fisherman’s Blues and then head out, find an excuse to eat at Waterboy (being alive’s a good one – I like to use that a lot) and be happy.

How to use social media to get your ass fired

My co-worker Dezi helped me out with this post, which sprang from a conversation we had about social media blunders that we saw, sadly, daily. They are, of course, common sense, but what we think of as common apparently isn’t.

1. Call in sick and then tag yourself having bottomless mimosas/bloody mary’s.

2. Call in sick and find yourself inadvertently tagged in a swimsuit, at the river, holding a beer. (And top it off by being under 21)

3. Arrive late to work after having posted the night before about the party that you left at 2 a.m..

4. Call in sick to work after having posted the night before about how drunk you are. (Note: even if you genuinely have the flu, just get your ass to work, because no one will believe you anyway)

5. Call in sick to work for an “accident” when you’ve posted proudly that you were drunk and got into a bar fight.

6. Complain about your work incessantly. Yes, everyone needs an outlet, but is complaining about your job when you’ve friended your mangers a smart move? Me thinks not.

7. Complain about your life constantly. Did you get up this morning? You did? Well, then you’re one step ahead of many. Stop whining, people remember that shit. (Thanks to Court for this one!)

8. Post wildly inappropriate pictures of yourself. Want to do it anyway? Fine, just consider un-friending your co-workers. One day one of them may be your boss and they don’t need that image in their head when it’s time for your annual review.

and finally the most annoying:

10. Post on facebook when you’re supposed to be working. You complained constantly about Timeline, did you never notice that there’s a timestamp on each post you make? Yeah, everyone can see that you posted that witty comment 2 hours ago, when you were supposed to be working. People pay attention to that – not just managers, but seething fellow associates who were, 2 hours ago, WORKING. (And if we don’t work with you we’re still a little bitter that while you go to work and feel important, we’re actually working as you, importantly, are screwing around on Facebook)

I am not the most maternal person in the world. I actually don’t really like kids, and I speak to my own as if he were a grown up (and am then frustrated when he behaves like, well, a child). But none the less, I’m a mom. I’m not even a hipster mom. Just a mom. Here’s how you can tell if you are either a. a mom, or b. mom-like:

1. You get really excited about stain remover that actually works.

2. An afternoon house cleaning while your husband takes your son someplace is a vacation.

3. Staying out till midnight does you in for the next day.

6. Your “sexy” dress still only hits at the knee, and of course you’re still wearing a bra and panties underneath.

7. You have an entire Pinterest board dedicated to cleaning.

8. When your sick co-worker insists that he doesn’t want a gingerale you give him one anyway telling him it will make him feel better. You then have to be reminded that he’s 26 and not your kid.

9. You have artwork on your walls that you know will someday be worth millions and on display in the MOMA.

10. You can spend hours on the floor playing legos.