A month of lists, redux

August in Sacramento used to be hell. Seriously. 105 degrees, the local news doing the obligatory “cooking eggs on the sidewalk” story, you’d actually feel sorry for the rattlesnakes kind of hell.  This summer has been moderate to say the least, but who knows what the next few weeks will bring. As in past years it might indeed be too hot to think. So once again I present to you an entire month of lists. Some will be repeats, because, really, my favorite literary theorists have not changed. Some will be new (sigh…so long Victor Martinez). Some will be serious….most will be frivolous.

Sit back, relax, pour yourself a drink, and enjoy.

End of an era

In a little over 10 minutes from now I leave to go pick up son J from daycare for the last time. I’ve spent the day at work bursting into tears from time to time (“um yeah, I’ve got…allergies…something in my eye…someone ran into me with the power-jack…I dropped an anvil on my foot”) just thinking about how he’s growing up at what seems a supersonic rate. Wasn’t I just pregnant? Wasn’t I just at UCD post-surgery holding on to my teddy bear while J was in the NICU? Didn’t he just learn to walk and talk a few minutes ago? How can he be going to kindergarten already?

I’m not really one of those people who regrets things. I do make the comment to husband J occasionally that I wish I’d slowed down and enjoyed when J was an infant more, but I know that no matter what, I’d always wish for more any way. I think it’s just human nature.

So it’s the end of one era, and the beginning of another. And I’ll be fine. Really. I just dropped an anvil on my foot.

Girls kick ass, it says so on the t-shirt

Over at Banana Oil there’s a great post entitled “Where’s Wonder Woman?” looking at the glut of superhero movies…and the complete lack of real female characters in them. This is one case where you can’t blame the largely 20-45 age range male writing teams at Marvel, DC and Image. Yeah Hollywood, they gave you incredible source material….it’s your fault you don’t know what to do with an Oracle, Jenny Sparks  or  Jean Grey.  It’s like they looked at the pictures, but didn’t actually READ the books. Yes, there are words. And characters. And conflict. It’s not just about a pretty face in a skintight suit. But apparently when it comes to casting, that’s what they’re going for, because the script is dictating that’s all they need. The movies are centered around the male characters, even the third X-Men  (which I thought was atrocious). In theory it was about the return of Jean as Dark Phoenix. That was theory only. I will argue with Banana Oil’s statement that she “got a chance to shine”. With what dialogue? She had a minor role in the film and if you had to count her lines they’d probably come in at less than Archangel’s.

Emma Frost, who in the books is a “love or hate her” girl (ahem..woman) and the counterpart to Jean, has the intelligence and ambition to rival any of the male characters. Scratch that – she doesn’t rival them, she beats them hands down, and that’s without taking her powers into consideration. But no one wants to see a movie about a tart wearing a merry widow and garters as a costume. They certainly don’t want to see it if she’s got a brain.

Would I? Don’t know. I’m wondering if my comic days are simply behind me. I love seeing when what I’ve read and loved has a visual to go along with it (Pride & Prejudice and Harry Potter two examples), but comics are already such a visual field that seeing it “in action” is almost superfluous. Seriously, you think you can film a better action scene that Bryan Hitch can pencil? (Ok, I’m crying uncle on one example here: “300”. Fucking amazing. I’d read it years ago, and still remember every SINGLE page…because they were burned into my retinas. Seeing it on screen was a revelation. But that won’t work with every adaptation.) Beyond simply trying to bring the action to the screen, can you bring the integral nature of the characters? Yes, in the case of Eric Lensherr. No for so many others, who sadly enough, tend to be female. Why is this possible with a book, Elizabeth Bennet and Hermione Granger come to mind, but not a comic book?

I’ll argue one more point, if I may: it takes years, YEARS, to develop characters and story lines in comics. Sometimes it takes years to get to know a character. One well spent afternoon can make you fall in love with Elizabeth Bennet, but it will take you ten times that long to even begin to understand Emma’s machinations. It might be due to the nature of the medium or of the industry (and while it is an art, it is also an industry).

Maybe scriptwriters and casting agents just don’t want to take the time. That’s a shame, ’cause girls kick ass. It says so on the t-shirt.

So today someone abandoned a puppy in the parking lot of the store. Yes, you read that right. Just left it in a shopping cart. As I succinctly put it, “Oh, someone’s going to hell.”

And while, sadly, I am never surprised by humanity’s lack of, well, humanity, I am constantly surprised, humbled, and generally in awe of how amazing my co-workers are.

Once she was found in the parking lot a group immediately went into “SAVE THE PUPPY!” mode. One got her some food and water. One held her and made sure she was calm. One made up a temporary home with towels (that I think were left over from the summer party). One found a nice quiet place for her to rest up. And pretty much everyone worked to find her a home by the end of the day.

Her name is Hazel, courtesy of B (I have no idea how she came up with name). She now has not only a new, loving home (with a one year old even!), but she has a whole store full of aunts and uncles.

So if you’ve had the sort of day that tests your faith in humanity, rest assured, it’s not all bad. And I can point you in the direction of some people who can make you believe it.

You should listen to me, I’m a mom

Some moms give sound, practical advice involving wearing sweaters and washing hands. Good for them. Since they’ve covered that, I’ll just add a few things that I think are essential.

2. Never go on the Kindle store when you’ve been drinking.   It’s too easy to spend money on crap that you don’t really want. And you’ll have to face up to it the morning. It’s the book-lovers equivalent of finding anyone, and I do mean anyone, to take home after a night at the bar.

3. Never invade Russia. Winter’s always right around the corner and you can’t get out in time.

4. Never read “Lolita” on the bus. People think you’re creepy. Actually, they also keep their annoying kids away from you, so if you don’t like kids, go ahead. Of course, then the REALLY creepy people talk to you. But not the stupid creepy people, because they have no idea who Vladimir Nabokov is.

5. It’s ok, pick the cookie up off the ground and eat it.

6. Learn how to throw a punch. You can be a pacificist if you want, but at some point you should probably know how to defend yourself. More importantly you should be able to defend others.

7. Always be nice to the “not quite so pretty” friend, roommate or sister. It scores you points, and you look like more of a gentleman for it.

8. Learn to make a really good cup of coffee.  So many people don’t know how. (Although I once had a fabulous cup of powdered, instant coffee in Paris. It was morning, the sun was shining and I was in Paris with my soon-to-be fiancée. Yeah, could have been the ambiance, and not the coffee)

10. Be nice. This does not mean “be a pushover” or “be a doormat”. This means be nice. Pleasant. Sincere. And when you discover that the other person is a jackass you can stop being nice. (Note: sometimes this is when “learn how to throw a punch” comes in handy)

In praise of Maggie, Brick and a hot night

Nights like these, while not the suffocating humidity of the South, are still pretty amazing.  It’s been a 100+ day, with the resulting humidity. The Delta breeze is cooling things down nicely (well, as much as it’s going to), and if you listen carefully you can still hear the cicadas. Over on the river the rattlesnakes are coming out to enjoy the warmed up blacktop of the bike trail, and probably chow down on the mice and lizards unlucky enough get caught. The deer are probably poking their heads out, along with the coyotes and up the river a bit more, perhaps a mountain lion or two.

You can make yourself a gin and tonic or a whiskey rocks and relax on the back porch with the overhead fan going to keep the air moving, and maybe read.

Alternatively, if you simply can’t bear the heat and don’t mind the electricity bill, you can stay in and watch. 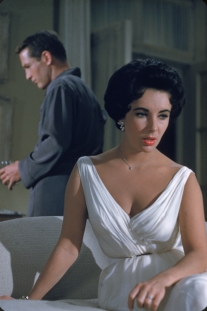 It’s really too hot to think, but that’s the beauty of Williams: you’re just caught up in the story and everything hits you like a ton of bricks (no pun intended) later.  Even if you try, really try, to keep your focus on the character’s idiosyncrasies, the setting, or, if watching, the visuals (and by visuals I mean, well, Paul Newman) the story creeps in, and you’ll wake up, maybe a couple of hours later, maybe ten years later, with an, “Oh. Oh!” And then you might need that whiskey.

But in the meantime, enjoy the characters (and trust me that you’ll appreciate Maggie more ten years down the road), the setting, the hot summer night, the cicadas and Paul Newman.